Living Earth School of Herbalism provides quality education in Western herbalism and related subjects for those who wish to learn more for their own personal benefit, or who wish to pursue a career in this field. Living Earth offers workshops and online courses for the general public as well as professional training for herbalists, other practitioners, and employees of the herbal and natural health products industry.

Our courses and programs were developed by herbalist Michael Vertolli, the director and primary instructor of Living Earth School of Herbalism. Michael has practiced and conducted empirical research in Western herbalism since 1986.

Living Earth courses and programs are recognized by the Ontario Herbalists Association (OHA). The OHA standards are recognized throughout North America. Graduates of the Traditional Herbalist program are eligible for professional membership in the OHA and to use the Registered Herbalist (RH) designation as long as they remain a member in good standing.

Courses and programs offered by Living Earth are based on the philosophy and practice of traditional Western herbalism. The curriculum consists of a modern synthesis of traditional European and North American traditions, incorporating current advances in physiology and other elements of modern medical science. We recognize that there is an incredible wealth of valuable information that has become available through these disciplines. Some of this information is relevant to the practice of traditional herbalism, but much of it is not as it is based on a fundamentally different understanding of the nature of health and the healing process than that of holistic healing traditions.

At Living Earth, we do not subscribe to the reductionistic and materialistic bias of the modern medicine. Advances in medical science that are important to the practice of herbalism are incorporated into a traditional, holistic paradigm rather than attempting to incorporate herbalism into a reductionistic medical paradigm.

Our philosophy is holistic and organismic, recognizing the importance of all levels of human functioning and experience (biochemical, physiological, emotional, mental, social, spiritual, etc.). The focus is on helping people to achieve a greater level of health and well-being, not just the elimination of symptoms at the physiological level. Within the holistic paradigm, people are the focus, not diseases. This philosophy is the cornerstone of all courses and programs offered by Living Earth.

Living Earth offers many general interest courses that are open to anyone. The majority of these courses are also part of the Traditional Herbalist diploma program. This program provides in-depth training and clinical experience for students who wish to embark on a career as a professional herbalist.

One of the limitations of many educational programs in Western herbalism is their lack of a clear and precise system of herbal therapeutics. Students are expected to memorize an abundance of information in herbal materia medica, therapeutics and related fields of study, along with subjects in modern medical science (often at a level of depth that is significantly in excess of what is necessary for the practice of most systems of herbalism). However, the information is often not integrated in a meaningful way, nor are the students provided with a system that allows them to easily apply what they have learned.

Traditional European herbalism was originally practiced according to a system of energetics that has its origins in early Greek and Roman medicine. A significant amount of the knowledge of this tradition was lost during the middle ages and much of what remains is incomplete or no longer relevant in the modern context. Although some practitioners and schools have attempted to resurrect this approach, which is preferable to not using any system at all, we believe that it is more useful to incorporate the fundamental philosophy of traditional herbalism into a modern context.

The backbone of the curriculum of the Living Earth Traditional Herbalist program is based on Four Elements Herbal Therapy. Although this system is named after the four elements of European and Native American traditions, it is not based on the system of energetics from Greco-Roman medical traditions. Four Elements Herbal Therapy incorporates traditional and modern knowledge and experience into an organismic approach that addresses all levels of physiological functioning within the context of a broader, holistic, person-centred approach to healing.

This system is safe, easy to understand and apply, and significantly improves clinical outcomes. It eliminates the many years of trial and error that students must inevitably experience when they graduate from programs that do not provide a concise system of herbal therapeutics. Many graduates of programs offered by other schools have enrolled in the accelerated version of the Traditional Herbalist program in order to learn and benefit from the Four Elements system of herbal therapeutics in their practice. All of them have found that this system has helped them to significantly improve the effectiveness of their work.

Four Elements Herbal Therapy is a system that was developed by herbalist Michael Vertolli, the director and primary instructor of Living Earth School of Herbalism, during the twenty-seven years that he has practiced and conducted empirical research in herbalism. It is one of the important features that differentiates the Traditional Herbalist program from other Western clinical herbalist programs.

Western herbalism is a very eclectic tradition. Practitioners often enthusiastically incorporate herbs from other traditions and parts of the world into their practice. Unfortunately, the desire of herbalists and the herbal industry for information on and access to exotic herbs has resulted in a general neglect of many valuable North American and European herbs. During his many years of research, a major focus of Michael Vertolli's work has been to develop an in-depth understanding of the therapeutic properties and indications of many of the common North American and European herbs that grow in eastern North America. As a result, another unique feature of the curriculum of Living Earth is that the materia medica includes Information on many important medicinal herbs about which information is scarce or completely lacking in the general literature. However, the herbs that are discussed are not just relevant to people who live in eastern North America. Many of them are circumboreal and occur throughout much of the northern hemisphere. Others are European herbs that have naturalized around most of the globe, or North American herbs that have naturalized in other parts of the world as well. As a result, the herbs that are covered are often native to or have become naturalized in many regions of the world, have local varieties or closely related species that are medicinally interchangeable, or can be readily grown in other areas. The materia medica is therefore relevant to many parts of the world. In addition, once mastered the principles of Four Elements Herbal Therapy can be applied to medicinal herbs from anywhere. 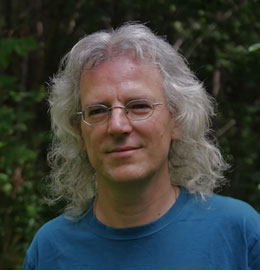 Michael is a Western traditional herbalist who has been practicing since 1986. He is a respected lecturer who has been teaching since the late 80's. He has lectured for many schools and associations.

Michael has written many articles on health and environmental issues, and has been a frequent guest on radio and television. He is currently writing a two volume textbook of Western herbal medicine which is the culmination of his many years of empirical research and clinical experience. Michael developed the herbal program offered by Living Earth and Four Elements Herbal Therapy, the system of Western herbalism upon which the Living Earth courses and programs are based.

Michael is a professional member of the Ontario Herbalists Association (OHA). He is also a leading activist regarding the regulation of natural health products and therapies. Michael is a former director and president of the OHA. He was the founding president of the Canadian Coalition of Herbal Associations, the Canadian Coalition for Health Freedom and the Canadian Council of Herbalist Associations (CCHA). Michael was also a member of Health Canada's Advisory Panel on Natural Health Products and the federal Minister of Health's Office of Natural Health Products Transition Team. Monika was blessed with the opportunity of growing up in the countryside of Southern Ontario where she spent a lot of her time in nature observing, listening and being. After spending time with indigenous people in the Amazon jungle she began her study of herbal medicine when she returned. Monika began her professional practice as an herbalist in 1997. She is an advocate of being in respectful relationship with the Earth and all living beings. As a healer, Monika helps people come to know the beauty of their uniqueness and live their truth to its fullest expression in health and wholeness.

In her role as Acedemic Support for Living Earth, Monika provides mentorship and helps students with their questions related to course content, how to study, or any other support that they require. Lianna is a traditional herbalist who spent several years studying in the field with Michael and trained as a Clinical Herbalist in Diane Kent's Western Traditional Herbalist Program. Lianna has many interests and skills that she has been developing alongside her training in herbal medicine.

Her focus has been on getting to know the local plants, connecting with Nature, and getting back to the basics in order to help forge a more sustainable future. In 2015 she became a professional member of the Ontario Herbalists Association (OHA) and opened her clinical practice in the west end of Toronto. She continually seeks to deepen her understanding through engagement with the natural world.

Lianna is currently a director of the OHA and the Canadian Council of Herbalist Associations (CCHA).